The date was January 1942. Great Britain was totally preoccupied with WWII. Percy Kindred together with his younger brother Herman were the Suffolk farmer/landowners of Crabbes & Park farms at Parham. Their lives were soon changed forever. Construction of a Class 'A' airfield called for half a million tons of concrete, three diagonal runways & a giant workforce. Rubble for hardcore was imported from bomb sites in London & Birmingham & 4,500,000 bricks were laid. Two enormous hangars appeared (in No 2 Glen Miller & the Band of the AEF performed before an audience said to number 6,000 in 1944). 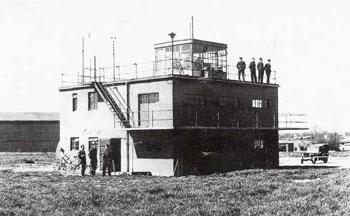 Although Suffolk had seen nothing like this before, there was more to come. The airfield was handed over complete to the united States 8th Army Air Force in early summer 1943 and redesignated 'Framlingham Station 153'. After suffering disastrous losses in daylight air attacks on the Continent, the first Bombardment Group the 95th, was transferred to nearby Horham to regroup. Replacing the 95th, the 390th were to operate B-17s 'The Flying Fortress' from Parham for the remainder of the War in Europe. In over 300 missions they dropped 19,000 tons of bombs, they lost 181 aircraft and 714 airmen were killed. Parham Airfield Museum is a Memorial to those men. 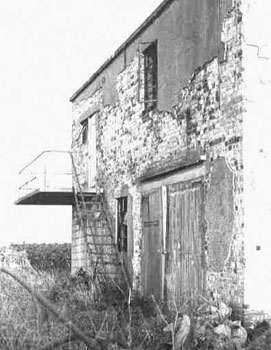 After the War in Europe, runways were broken up and the land returned to the Kindred brothers. Buildings were allowed to become dilapidated and when not pulled apart were used for farm storage. Many of those still standing are now 'collector's items'. Among them was the Control Tower shot up and abandoned after the Americans held a riotous farewell party there in August 1945. With Station 153 now neglected, windowless & derelict, a dedicated and determined group of volunteer enthusiasts working with Founding Chairman Ronald Buxton, entered into the five year task of restoration, in 1976. Support for this entirely self-funded project was given by Percy Kindred until the day he died in 1996.

The Tower was finally dedicated as the 390th Bombardment Group Memorial Air Museum of the USAAF on 13 May 1981, and since then has remained in active contact with and received steadfast support from US veterans, their relatives, supporters & friends. 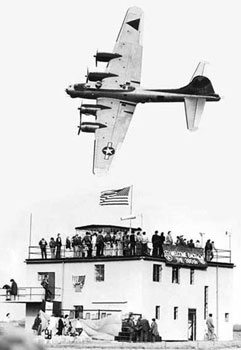 Early exhibits were provided by the efforts of those dedicated enthusiasts responsible for restoring the Control Tower, with efforts in the field to recover aircraft parts & memorabilia long since buried in the soils of East Anglia, usually after pinpointing the location of a previously unexplored air disaster, whether American, British or German. The exhibition display has continued to expand and recently to benefit from more formal archiving & administration than was possible in the early days, when the main effort was essentially 'in the field'. 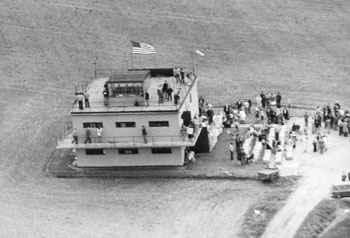 These credentials called down extraordinary post war secrecy, amplified by the fact that the men of the Auxiliary Units (there were about 3,500 throughout the land at any one time) had existed and operated, although generally without their knowledge illegally and in direct contravention of the Rules of War. The nation's survival was the indisputable imperative. Before 1997, the Auxiliary Units were left with virtually no public recognition.

Two viable, long term museums now exist registered as one charity, with the MLA & the British Aircraft Preservation Council are now operating successfully at Parham, entirely due to a common link through Percy & Herman Kindred. Percy's son Peter is now the President.

The Air Ministry surveyed the land between Parham and Great Glemham in January 1942, requisition papers being served to the landowners in February of the same year. Work started in May 1942 and the first concrete being laid in June. Two contractors were involved, Constable and Hart and Haymills Ltd. Labour was of significant importance, but was in very short supply and not always of the standard builders would have wished, but as the saying went " Don't you know there's a war on?"

Speed was a dominant factor, but before construction could begin the area had to be cleared of nearly eight miles of hedgerows and 1500 trees, first the trees were cut down and then the roots blown up. It was also necessary to dig a large reservoir that was supplied from the river Ore to hold water needed to mix the vast amounts of concrete needed for the project. Hardcore, of which there was never enough, was obtained from any source, bricks and rubble from bombed buildings in London and Birmingham and other towns provided a large ammount together with tons of shingle from nearby beaches.

Night and day trains and lorries carried these essential elements to the local station and along what had been quiet country roads and lanes, cement at that time was carried in sacks that were delivered to the site, emptied then returned for filling, on site a major form of transport was the horse and cart.

The airfield was built to a specification known as a class "A" standard operational airfield, this involved 3 intersecting runways 60 degrees to each other all 150 feet wide, two of these being 4400 feet long and the main runway was 6400 feet long, the perimeter track was 50 feet wide and would circumscribe the entire flying area and was 3.25 miles in length.

The airfield was designed to accommodate 1500 personnel but eventually had over 3000, the design necessitated the building of dispersed living quarters, communal sites, recreational, training and storage facilities, as well as basic utilities such as water, sewerage disposal plant, electricity and telephone.

Most of the flying area had been completed by November 1942 and had already been allocated to the United States Army Airforce and was officially transferred to the 8th Army Airforce on August 15th 1943.

On August 17 1943 attacked the Messerschmitt aircraft complex at Regensburg and received a DUC for the mission. Received another DUC for a mission on 14 Oct 1943 when the group braved unrelenting assaults by enemy fighters to bomb the antifriction-bearing plants at Schweinfurt. Participating in the intensive Allied assault on the German aircraft industry during Big Week, 20-25 Feb 1944, the organization bombed aircraft factories, instrument plants, and air parks. Other strategic missions included attacks on marshalling yards at Frankfurt, bridges at Cologne, oil facilities at Zeitz, factories at Mannheim, naval installations at Bremen, and synthetic oil refineries at Merseburg. Sometimes flew interdictory and support missions. Bombed the coast near Caen fifteen minutes before the landings in Normandy on 6 Jun 1944. Attacked enemy artillery in support of ground forces during the breakthrough at St Lo in July. Cut German supply lines during the Battle of the Bulge, Dec 1944 - Jan 1945. Hit airfields in support of the airborne assault across the Rhine in Mar 1945. Flew last combat mission on 20 Apr 1945. Dropped food supplies to the Dutch during the week prior to V-E Day.

On August 11th 1945 the 390th arrived in New York Harbor. After a months leave the Group reassembled at Sioux Falls S.D, but never reorganized as a unit. The 390th Bombardment Group was deactivated on August 28, 1945.