On 4th April Trevor Miners of the Perranporth Auxiliary Units Patrol died aged 89. Trevor joined the Perranporth Patrol in 1943 at the age of 16. He spent two years with the Aux Units before being called up as a Bevan Boy. After a number of years down the mines he was released and returned to Perranporth. Trevor was a great supporter of the museum contributing to its archives and attending functions when able. I had the privilege of meeting him last September at Coleshill. His story, as that of other veterans, has been catalogued by the researchers of CART, many of whom became friends. John Warwicker, who had known Trevor for many years, has written of him as a "kindly patriot, a thoughtful, sensitive, honest man, always a credit to his nation". He will be sorely missed and our condolences go to Muriel and their sons Stephen and Andrew. 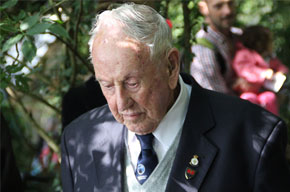